Classical Guitar history and more for the avid guitar aficionado!

Maestros-of-the-guitar.com offers an online resource for the avid guitar player. The classical guitar genre offers a rich heritage and history, and aficionados will find a vista of choices in the instrument's 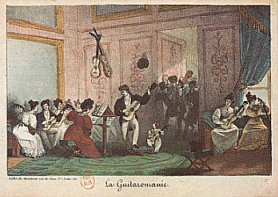 repertory : from an ornate Bach Bouree, or the stately Divertissemens op.2 no.6 by Fernando Sor, to the entertaining Luz Mala by Augustin Barrios. Professional quality sheet music for the guitar featuring various composers can be found at this page.

Although Classical Guitar history can be traced back many thousands of years to the ancient cultures of Persia, this site focuses on the composers of the relatively recent time, of 500 years. These 500 years can be divided into distinct periods namely :

The word Renaissance is French meaning 'rebirth'. The general period of history attached to this name, refers to a cultural movement in Europe that span from roughly the 14th through to the early 17th century. By this period the conquerors of Spain - the Moors - had brought with them musical instruments, such as the lute and the guitar, which which were eventually widely used throughout all of Europe (the name lute is derived from the Moorish name for the instrument of al'ud). In the 14th century that lute had become a favorite musical instrument in western Europe.

Lute music was high art and its manner of playing was similar to the modern classical guitar. In the early 16th century it had six courses, and later increased to as many as ten courses. The Renaissance guitar featured only four courses of gut strings, of which the first was single and the other three double - the word 'double' refers to two strings which are struck simultaneously as in the twelve-string guitar today. Popular songs of the day sung, and accompanied by strummings of the guitar was the musical environment regarded as the fullest extent of the Renaissance guitar's potential. However, there were several significant guitar music publications published by composers such as Alonso Mudarra in Spain and Adrien le Roy Guillaume de Morlaye in France. These pieces feature the use of the lute technique transferred to the guitar, of plucking individual strings with the fingers.

Between 1600 to 1750 the European-centered cultural epoch now known as the Baroque period occured. All types of art such a sculpture, painting, literature, dance, and music were exemplified by ornate grandeur and ornamentation. In this period the guitar became accepted as a more serious instrument than previously was the case, and many fine composers began writing for it. The typical Baroque guitar now had five courses, the first being single and the others double. The instrument often utilized a re-entrant tuning scheme, where for example the bottom course was tuned an octave higher than might be expected.

Court musicians in the employ of royal families made a large contribution to the guitar's widening appeal during the Baroque period. Ornate construction was now utilised and leading instrument makers such as Antonio Stradivari built guitars. This era of classical guitar history continued to feature accompaniment for singers as the main function of the instrument. However, some significant sheet music publications during the 17th and 18th centuries, indicate to us that the guitar was also used for contrapuntal music, as well as music which combined the traditional strumming and contrapuntal elements.

Some of the leading composers of the guitar music during the Renaissance period included Gaspar Sanz, Santiago de Murcia and Francisco Guerau of Spain, the Frenchman Robert de Visee and the Italian virtuoso Francesco Corbetta.

A musical period in which the guitar featured less prominently, was the classical period which ranged between 1750 and 1820. This was the era of Joseph Haydn, Wolfgang Amadeus Mozart, and Beethoven. The guitar fell out of favor for professionals and amateurs alike, as they were attracted to the louder and more versatile instruments such as the harpsichord, violin and cello. Spain was however the region in which the guitar never lost its popularity.

In the latter half of the 1700's the guitar went through some radical changes :

A sixth course was added, this being retained to the present day. Cheap and readily available wire-wound bass strings were introduced, through new string making technology in the 1780's where metal was wound around silk fiber. There were two consequences of using these wire-wound strings, metal frets (ivory and ebony was also used) became necessary to prevent the new strings cutting into frets made of gut, and the double courses utilizing these new strings were reduced to single courses to reduce the volume offered by the new strings.

The neck was lengthened and fitted with a raised fingerboard extending to the sound hole, where the traditional rosette was replaced with an open hole. To facilitate the lengthened and raised neck, nineteen fixed metal frets came to be the standard, and the bridge was also raised. Fan-strutting beneath the table was introduced to support higher-tension strings, and the body was enlarged.

From 1825 to 1910 an era known as the Romantic period existed. In this period classical music moved out of the confines of the aristocratic elite, and found audiences in a much wider social realm. This was in years subsequent to the French revolution, when social and political change was rapidly changing the status quo of past centuries of Aristocratic domination. The music of the time reflected this blossoming freedom, the musicians now no longer bound to the tastes of their former patrons. There was a rise in the middle class, and instead of the small audiences found in a Nobleman's castle, Romantic composers often wrote for public concerts and festivals for large audiences of paying customers. Stylistically some composers analogized music to poetry and its rhapsodic and narrative structures. The use of themes became prominant, with more emphasis on melodies. There was an explosion in the composition of songs, from the Lieder by Franz Schubert to Fernando Sor's Seguidillas, composers wrote music for a new class who could afford instuments, and lessons to learn to play. The extensive improvements to the baroque guitar in the latter half of the 1700's ushered in a resurgence in the popularity of the instrument in the early 19th century. Aided by improved communication and transportation a new generation of virtuoso guitar player/composers began to emerge, displaying their skills throughout Europe. Amongst the most famous of these included the Spaniards Fernando Sor and Dionisio Aguado, the Italians Matteo Carcassi, Fernando Carulli, Mauro Giuliani and Luigi Legnani. This exposure of the guitar through concert tours, brought about a growing amateur market, for which this plethora of artists readily produced very rich and varied output of published solo, and ensemble guitar sheetmusic. A Spaniard luthier Antonio Torres Jurado began building guitars with a marked improvement in volume and tone in the late 1800's. He was associated with many fine Spanish composers such as Julián Arcas and Francisco Tárrega who used his instruments. The Torres guitar design became a standard which has remained largely unaltered up to this time.

In this era many technological innovations, such as radio, television, and the gramophone have had wide ranging effects on the world of classical guitar music and the musical world in general. Previous musical eras featured major composers who also worked as recitalists, often confining their repertoires to their own compositions. Concert tours were a means of promoting their own sheet music publications. In classical guitar history a growing trend in more recent decades has been a specialization in either composition or performance. With the advent of recorded music, concert tours have now been more of a promotion of recorded material by the performer, with a promotion of sheet music being secondary. The 20th century saw recitalists performing in venues accommodating very much larger audiences. This is in contrast to the intimate venues frequented by musicians who were in the employ of aristocratic and royal patrons. Guitar constructors thus took this need into account and sound volume became a priority in guitar design. The first classical guitarist to take advantage of these new technologies, and to satisfy the demands of modern audiences, was the Spaniard Andrés Segovia. Not being a major composer himself, through his mastery of the instrument he was able to persuade contemporary composers to write dedicated guitar works.

An attempt is made to include the important art of transcription, indeed many composers of Classical Guitar music like Francisco Tarrega made equal contributions as transcribers. Added to this, particularly in the more recent history, guitarists more known for their performance prowess such as Andres Segovia and John Williams also made transcriptions which they included in their performances, thereby promoting the original composition and the Classical Guitar repertory.

This instrument has a special role in the ensemble setting : it is able to provide harmony as a piano does (without having to cart around a heavy instrument!), and provide interplay with the melody-only instruments, such as violas, violins, clarinets and flutes. It is also effective when combined with bass instruments like the cello where it is freed from the bass duties and can provide more complex interplay, or indeed team up with the bass instrument to induce some chair-vibrating sonority.