A Painter and Musician

This Barcelona born maestro of the guitar was the son of a wood sculptor , and was baptized in the month of his birth in the church of Saint Just i Pastor on the Carrer de la Palma. He grew up in the vicinity of this church which is just a few streets from the later residence of his eventual teacher Francisco Tárrega. He was trained as an artist, revealing a talent for painting, and continued to paint throughout his life. Early on he learnt to play the violin and the piano , and later received a guitar as a gift from an uncle. He was inspired to seek instruction on the guitar from Magí Alegre at the age of eleven after attending the guitar recital at the Teatre Catalunya in Barcelona, performed by Antonio Jiménez Manjón. 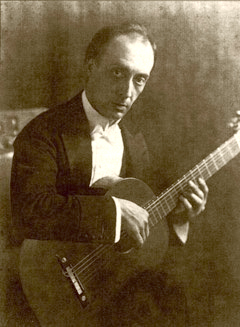 In October, 1892 Miguel Llobet met Francisco Tárrega, and at the age of 16 years he began to study with him at the Municipal Conservatory of Music in Barcelona. By his own account, his studies with Tárrega do not seem to have been based on any particular method, rather Llobet would observe Tárrega play, and then experiment with his techniques at home and thus as he said "In this way, more than by learning it, I experimented with my guitar technique". He began performing private concerts for small audiences 4 years after beginning lessons with Tárrega, and later met Tárrega's patron Concepción Jacoby, who as his patron also, helped him to launch an international career. In 1901 he performed his first public concert at the Conservatory of València, and followed this with concerts at conservatories in Seville and Málaga where he was awarded the honorary title of Professor. The Teatro de la Comedia welcomed the artist in 1902 , and he performed before the Spanish royal family in Madrid in 1903.

He subsequently was presented for his first concert outside of Spain in Paris, by the noted pianist Ricardo Viñes, in 1904. The appreciation of the Parisians was such that he return to live in 1905, performing at such prestigious venues as the Schola Cantorum, La Trompette and the Société Nationale de Musique. In 1910 he temporarily relocated to Buenos Aires, from where he concertized throughout South and Central America and the Caribbean. These tours were largely arranged by Domingo Prat, (author of the Diccionario de Guitarristas (1933)), Juan Anido (father of María Luisa Anido) and Ruiz Romero of the publishing house Romero y Fernandez. Two years later he made his first appearances in the United States of America, performing in Boston, Philadelphia and New York. Concert tours throughout Europe followed his return to his home in Paris. Belgium and the Netherlands were an important part of his itinerary , and during 1913 -1914 he performed throughout Germany. During World War I he again traveled to Argentina and performed in the Americas. His most important pupil, Andrés Segovia, approached Llobet around 1915 for instruction , when that young Maestro was 22 years of age. Segovia knew that through Llobet he would have a direct link to the methods, techniques , and repertoire of Francisco Tárrega, though he claims that he was little influenced by the teacher.

Sometime between 1912 and 1917 Miguel Llobet attempted to make a recording of his playing, with the prominent guitarist Vahdah Olcott-Bickford recalling that "he tried to make a recording at the Bell Lab in New Brunswick, New Jersey, but was dissatisfied with the sound". Ronald Purcell that around 1930 Llobet recorded some of his duet arrangements with his pupil María Luisa Anido , an Argentine whom he had been teaching since 1923. These recordings were some of the first of the classical guitar and were produced by the Odeon-Parlophone label and distributed by Decca.

He returned to the Americas in 1930 to perform for the Spanish Arts Festival, under the auspices of the Library of Congress. He was contracted to pay six solos, and to arrange a performance with soprano Nina Kochitz consisting of Manuel de Falla's Siete Canciones Españoles. Back in Europe the maestro performed in many major cities including London, Berlin, Hamburg, Munich, Vienna, Budapest and Bologna. On hearing him in Berlin, the German composer Paul Hindemith declared an intent to compose for the guitar but did not follow this through, Hindemith's only work for guitar, the Rondo for Three Guitarsher, had been written in 1925. Back in Barcelona the young Cuban virtuoso José Rey de la Torre was a pupil taught at Llobet's home between 1932 and 1934, now 55 years of age Llobet began to cut back on his performance schedule and during these three years left Barcelona only once for a month's tour of Scandinavia. He had a quiet retirement frequenting concerts and walking with his wife, Emilio Pujol was a frequent guest and Manuel de Falla visited whenever he was in Barcelona. The Spanish civil war began in 1936 and Barcelona was besieged, this perhaps leading to the downward spiral of health that ended with Llobet dying of pleurisy in 1938.