A pioneer of
the new notation

Born in Madrid, this Spanish Maestro surname is derived from the spanish word for "soaked" : this was a nickname an ancient relative, a knight, acquired after returning from a battle caked in mud! Dionisio Aguado was taught by Miguel Garcia. 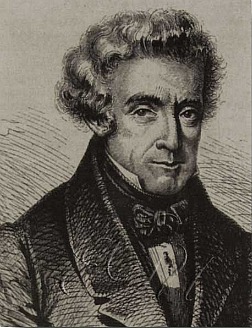 At this time tablature was still the notation of choice for guitarists in Spain. Frederico Moretti began employing 5-line staff notation, distinguishing different parts through the use of note stems and rests. Along with others, such as Fernando Sor also a Spaniard, Aguado switched to this new guitar notation.

In the aftermath of the Napoleonic french invasions of Spain (1808), Aguado continued to perfect and develop his technique while working as a guitar teacher in the village of Fuenlabrada. 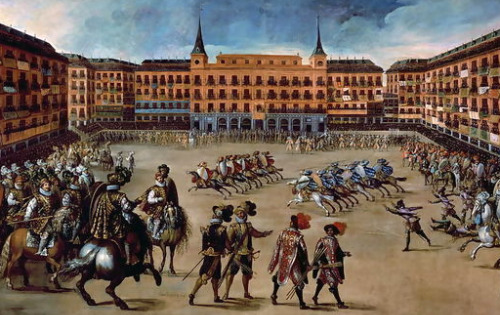 
A "Coleccion de estudios para guitarra" was published in 1820, and five years later his guitar tutor "Escuela de Guitarra" appeared, both in Madrid. In this tutor Aguado describes the use of fingernails on the hand used for striking the strings, as well as an invention of his own creation - the tripodion - a device which held the base of the guitar and thus limited the dampening effect of the player's body touching the instrument. In 1824 his mother died, and a year later Aguado left for Paris. 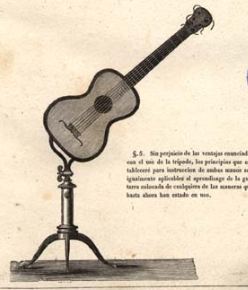 In the French capital Aguado built a reputation as as an excellent performer and teacher, his guitar tutor, now revised, was translated by Francois de Fossa into French (Methode complete pour la guitare) and printed in 1826. Dionisio Aguado was friendly with Fernando Sor, and the latter commememorated the friendship in his work for guitar duet Les Deux Amis ("The Two Friends"), with one part marked Sor and the other Aguado. Their technique differed with Sor preferring not to use his fingernails.