An opera singer as
well as guitarist!

This Italian guitarist, composer and instrument maker was born in Ferrara on 7th November 1790. Legnani initially trained as a string player (violin, viola etc.), but later devoted himself to voice, and the guitar. As a tenor he debuted in Ravenna in 1807, during the 1820's he featured in this role singing in operas by Rossini, Pacini and Donizetti amongst others. 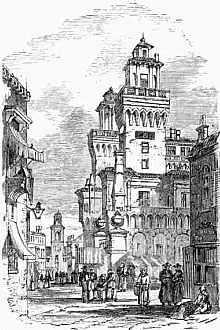 Ferrara, where Legnani
was born in Italy

Luigi Legnani's concert guitar career began in earnest in Milan in 1819. Three years on he appeared in Vienna, Austria where he was regarded as the worthy successor to Mauro Giuliani, the latter having departed Austria for his homeland in 1819. He successfully made later appearances in this musical-centre on two occasions, 1833 and 1839, both were equally well received with the Viennese hailing him as a star. Legnani also toured Italy, Germany and Switzerland.

Legnani was well acquianted with one of the leading violinists of the time, Niccolo Paganini, who regarded Luigi Legnani as the leading player of the guitar of the time. Paganini was also an avid guitarist himself, and composed for the instrument in ensembles with string instruments. The two maestros planned to perform in concert as a duo in Turin, by way of a series of recitals in 1836. But, probably owing to the violinist's poor health these were cancelled shortly before the allotted date. 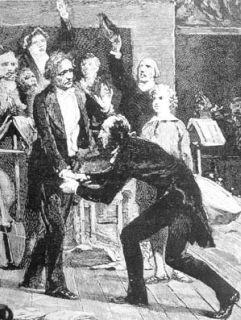 Niccolo Paganini and
Hector Berlioz - Legnani was
held in high esteem
by the violin virtuoso
In 1850 the guitarist retired from concert performance to reside in Ravenna, and turned to the construction of his beloved instrument, along with the violin. A famous guitar - the 'Legnani model' - featuring a screw adjustment for the neck was widely copied in central Europe. Luigi Legnani died in this city at the age of 87 years.

With over 250 works Legnani made a major contribution to the classical guitar repertory. These included solo guitar works, a gutair-playing method instruction, fantasies, potpourries, capriccios, variations on well known operatic themes; duets for guitar and concertos. Of some popularity are his 36 caprices written in all the major and minor keys and probably inspired by Paganini's 24 caprices for violin.

Luigi Legnani's Capriccio no.2
performed by
Thomas Viloteau
at the Gitaarsalon
Enkhuizen, Netherlands

Caprice no. 2 + 7
performed by Shon Boublil