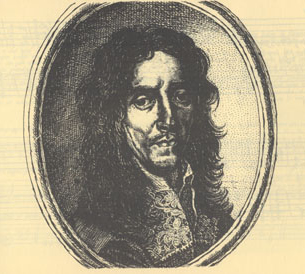 His early career was probably spent in Florence possibly in the service of Jacopo Salviati, Duke of Giuliano (1607-1672), for whom he dedicated his first book Libro primo di chitarra spagnola which was published 9th August 1640. In the early 1650's Angelo Michele Bartolotti was invited, as a member of a small troupe of Italian musicians, to work in the Court of Queen Christina of Sweden. He continued in the employment of the Queen until her abdication in 1654, and followed her south, finding a temporary patron in her erstwhile host on her travels, Archduke Ferdinand Karl in Innsbruck. Queen Christina ended her journey of exile in Rome in 1655, the same year in which Bartolotti published his second book of guitar solos Secondo libro di chitarra , which was dedicated to Christina and bore her family coat of arms and was evidently published to regain royal favour. It appears that he failed in this endeavour and he moved to France where he was feted for his theorbo playing in the royal court. Bartolotti lived out his the rest of his life in Paris, and died there sometime before 1682.


Angelo Michele Bartolotti two volumes of guitar works are significant in the development of the guitar, particularly as during this era the guitar was overshadowed by the lute in popularity. The first book, published in 1640, contains a cycle of passacaglias in all major and minor keys featuring Giovanni Paolo Foscarini inspired battute (strummed) and pizzicato (plucked) right-hand styles. Additionally there is a ciaconne (chaconne), a folia and six suites each comprising an allemanda (allemande), corente (courante) and sarabanda (sarabande). In 1655 some of the most spectacular guitar music of the 17th century was published in Bartolotti's second book. This book was is more french-influenced than the first, featuring intricate lute-derived textures and precise indications for various playing styles and ornaments culminating in some of the most carefully notated guitar music of the period.