Yet another Italian Francophile

Born in Florence, Italy, Matteo Carcassi began music in his childhood first on the piano, and later on the guitar. Early on he acquired a reputation as a superb concert performer on the latter instrument. 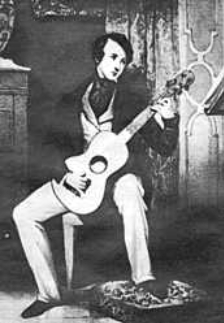 At age 18 Matteo Carcassi moved to Germany, where he found success. He is believed to have fought for France in the Napoleonic wars and 5 years later resided in
Paris
, France. His obituary in the Journal des Débats of 20 January 1853 said "[il] avait fait de la France, qu'il avait servie comme soldat, sa patrie adoptive et de prédilection." ("He had made of France, which he had served as a soldier, his adopted and favourite country").

Carcassi's name appears as a subscriber of the French edition of Francesco Molino's Nouvelle Méthode pour la Guitare. He taught both piano and guitar, while continuing with concert tours. His early works from 1820 were self-published and one of these, his op.4 six valses, has survived and is featured in the British Library. On one such tour to Germany he made the acquaintance of another famous guitarist Antoine Meissonnier, a Frenchman who also owned a publishing house in Paris. In all the time Carcassi had lived in France he had not encountered Meissonnier, even with with the two living in the same city together! Perhaps this is a reflection of the dirth of musicians involved in satifying the rapidly growing market for all things guitar in Paris. Meissonnier subsequently published many of Carcassi's works and the two were close friends. 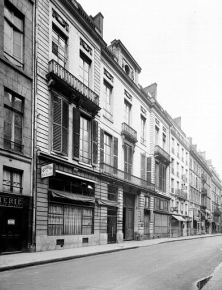 Carcassi lived in
no. 8 rue de la Grang
Batelière which still stands
close to the centre of Paris

From 1820 on his career was in the main centered in Paris, with a highly successful tour to London, England two years later. However, Carcassi had stiff competition in France in a Parisian favourite Fernando Carulli, nevertheless there was a voracious market for his solo guitar compositions. As Carcassi's fame grew he performed in the more prestigious concert halls around Europe. He ended concert practice in 1840, and died in Paris in 1853.


Matteo Carcassi's Study
in A Op.60 No. 3
performed by
Kevin Loh


A Favourite of guitar students

Carcassi published a three-part method for guitar, "Methode complete pour guitare" op.59 in 1836, in which he intended to "give in the clearest, simplest, and most precise manner, a profound knowledge of all the resources of this instrument". About 80 of his compositions were published with opus numbers, mainly by Meissonnier. Amongst his most famous is a set of 25 etudes op.60, featuring a blend of technical skills and brilliant romantic music. His compositions are accessible technically to student guitarists, hence their popularity amongst this group, though his works have been performed and recorded by many established professionals as well.