﻿
The Biography
of Francesco Molino

Following in his
father's footsteps

This Italian Meastro was born In Ivrea on June 4, 1768. His father Giuseppe Ignazio was also a musician, an oboist in the service of the Piedmontese troop band. Francesco followed his father in choosing a military career, at the age of 15 years he joined the Piedmont Regiment as a volunteer, thereby also learning his father's instrument, the oboe. He also became acquainted with the rudiments of music. He also undertook training training on the viola, and by the age of 18 years he was active as a violist in the orchestra of the Royal Theater of Turin. Francesco Molino was born in Ivrea, near Turin
Etching by Martini


4 years later in 1818 Francesco Molino made his way to Paris, where he presented himself as a string player, however he was also entering the world of the guitar. Ferdinando Carulli and others had built a considerable culture of guitar playing in the French capital and it was into this established tradition that Molino began to work. He built a successful career for himself counting amongst his guitar students members from the highest strata of Parisian society, and attracting the admiration of others such as the Duchess of Berry, who was also a student of Molino. The bulk of his guitar compositions were published during this "Paris" period from 1820 to 1835. The guitar suffered a decline in popularity around 1840, and this is reflected in the fact that Molino's later compositions were for violin. He died in Paris in 1847. 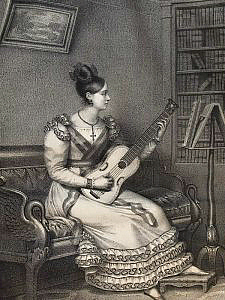 In total Molino penned sixty guitar works. His Method set out new concepts in guitar technique and achieved a substantial success. Other mentionable pieces include his brilliant Sonata, Op. 51; a series of chamber trios and nocturnes for guitar and flute duet; and his Op. 56 Concerto for guitar and orchestra. Rudolphe Keutzer, the virtuoso violinist and composer dedicated his Second violin concerto for Violin and Orchestra, Op. 25 to Molino with whom he had a deep friendship.

There was some disagreement between various guitar teachers as to the correctness of techniques used. In particular Fernando Carulli and Molino approached the use of the left-hand thumb differently. Carulli advocated the use of the thumb to play bass notes saying :

"In some methods, the authors absolutely forbid the pupils to make use of the left-hand thumb, by the side opposite the other fingers, on the sixth string and sometimes on the fifth. As music is more agreeable when it is richer with harmony, 4 fingers are not enough for its execution, and at the same time, a melody requires its bass notes in different keys, thus one must necessarily use the thumb; therefore, I invite all those who wish to play with a greater facility, to use it." 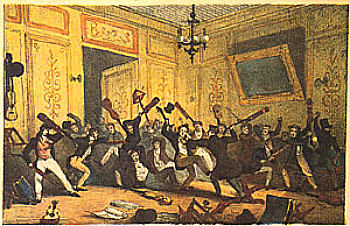 A discussion between the Carullists and the Molinists


While Molino claimed that all musical possibilities are 'at hand' without the use of the left-hand thumb :

"I advise the students to never use the LH thumb because one can produce on the guitar all the harmony of which it is capable, without using the thumb, because in order to use it, it is necessary to entirely disturb the position of the hand; besides, the use of the thumb is very uncomfortable for those with small hands. Consider the music of Mr. Sor, so full of harmony that it can be taken for piano music, and at the same time he performs it without the use of the thumb."

Famously one Charles de Marescot caricatured this difference of opinion in his book La Guitaromanie, in which there appears a hilarious image depicting a "discussion" between supporters of the two camps of teaching. The guitarists are seen to be having a heated exchange, using their Lacote guitars to waylay their opponents opinions in a most vigorous manner! The picture is labeled "A discussion between the Carullists and the Molinists" ! .


Sonata no.1 Op. 6 by Francesco Molino
performed by Marek Cupák