Enrique Granados y Campiña was born in the Spanish town Lleida, to a Cuban father. He studied music from a young age, and was taught piano by Joan Baptista Pujol in Barcelona. Pujol created what could be called the first Catalan piano tradition, and counted amongst his students Isaac Albeniz. Enrique Granados was also a talented painter in the style of Francisco Goya. 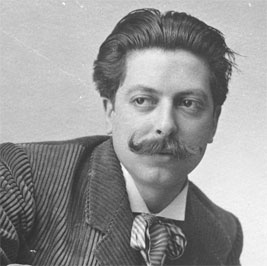 Age 20 Granados moved to Paris to study with Charles de Beriot and Felipe Pedrell, where he came into direct contact with some of the most important French composers of the time including Gabriel Faure, Claude Debussy, Maurice Ravel, Paul Dukas, and Vincent d’Indy. He established a very close relationship with Camille Saint-Saëns. Two years he returned to Barcelona to begin his career as a performing concert virtuoso and composer. In 1892 the gave the first performance of Grieg’s piano concerto in Spain. The subsequent years saw the premier of several of his stage works, Miel de Alcarria, Maria del Carmen along with various chamber works and pieces for piano. Granados' Zarzuela Maria del Carmen was a major success , earning him the attention of King Alfonso XIII. 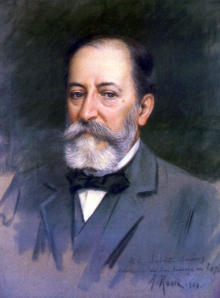 Granados was friendly
with the French
composer Camille
Saint-Saëns

At age 44 Granados premiered his most famous work the suite for piano Goyescas, which is s set of six pieces based on paintings of Goya. An opera based on the subject followed but the outbreak of World War I delayed the European premiere and instead it was first performed in New York City on the 28 of January, 1916. The opera was received with high acclaim and a subsequent invitation saw Granados giving a piano recital to none other than President Woodrow Wilson himself. While in New York City he also contributed live-recorded player-piano music-rolls for the Aeolian Company, all of which have survived and can be heard to this day.


Danza espanola no. 10 by Enrique Granadosperformed by Andres Segovia

Enroute back to Barcelona, following the successful visit to United States of America Granados and his wife Amparo boarded a ferry for the journey between Britain and Spain. This was during the German navy's campaign of unrestricted submarine warfare against the Allies, and the ferry was torpedoed while crossing the English channel. In the confusion that followed Granados found a life-boat, but when he saw his wife flailing in the water he jumped in to save her, and tragically drowned along with her.
Granados wrote piano music, chamber music (a piano quintet, a piano trio, music for violin and piano), songs, zarzuelas (a type of musical theatre) http://en.wikipedia.org/wiki/Zarzuela, and an orchestral tone poem based on Dante's Divine Comedy. Transcriptions of his compositions are popular amongst classical guitarists and include : Dedicatoria, Danza No. 5, and Goyescas. Along with Isaac Albeniz and Manuel de Falla, Granados is often recognized as a Spanish nationalistic composer, who work was influenced by Frédéric Chopin, Robert Schumann, Edvard Grieg and Franz Schubert.