A determined student
of the guitar

The virtuoso classical guitarist Andrés Torres Segovia (February 21, 1893 – June 2, 1987) was born in the town of Linares, situated in one of Spain's autonomous regions, Andalusia. He is widely regarded as one of the, if not the, best known classical guitar personalities of the 20th century. He made a major contribution to the expansion of modern classical guitar repertoire through his collaboration with prominant composers, and his own guitar transcriptions of existing works. An expressive performer, he is remembered for a distinctive (often instantly recognizable) musical personality in tone, phrasing and style. 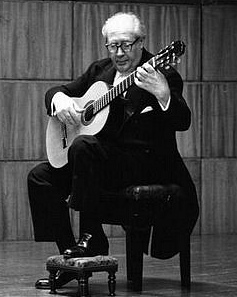 Up to the age of two years Segovia lived with his parents, but thereafter he lived in care of his Uncle and Aunt, Eduardo and Maria in the village of Villacarrillo. Segovia began playing the guitar at age six, early on he was taught flamenco by an amateur flamenco guitarist named Agustinillo. Indeed Segovia's first instrument was one formely played by the famous gypsy flamenco player Paco de Lucena. His parents objected to him learning this lowly instrument which only belonged in taverns, and promptly sent him for cello and piano lessons. Little Andrés persisted in learning the guitar. His Uncle and Aunt moved to Granada where Segovia was to receive a formal education, and so at age 10 Andrés found himself seeking guitar instruction at the Granada Institute of Music.....finding no teacher of the instrument he set out to teach himself! Two years later he had his first experience of classical guitar music when he heard a performance by a flamenco guitarist Gabriel Ruiz de Almadóvar, who was playing Tarréga preludes. While in Granada he immersed himself in the experience of the Alhambra Palace (The inspiration for Tarréga's Requerdos de la Alhambra) which he regarded as a spiritual awakening. (Watch this video)
Andrés Segovia's first public perfomance was held when he was 15 years of age. Following a concert at the Arts Center of Granada 1909 Segovia decided to make a career of concert guitar playing saying “suddenly I decided to be the Apostle of the guitar". He subsequently left school to concentrate on guitar and music studies - his deficiencies in technique were made up for partly by the detailed practice of scales.


The guitar music of Francisco Tarrega had a profound influence on Segovia, he never met Tarrega who died in 1909 - nevertheless the young guitarist was able to pick up where the Maestro had left off. Some years later in Madrid Segovia played for Don José del Hierro, head professor of advanced violin studies at the Royal Conservatory - the professor admired his talents, but not his choice of instrument and attempted to convert him to the study of a conventional instrument like the violin saying : "I like your temperament and technique.….. What a pity such skill should be wasted on the small and undeveloped world of the guitar. Beautiful, perhaps, but solitary and wild; few men of talent have ventured there and you have chosen to spend on it all your God-given talent - why not consider changing instrument? You are still young enough; you could become famous playing the violin." in reply to this Segovia demonstrated his commitment to the guitar and continuing the work of the Maestros that had preceded him : “I would never turn my back to the guitar. It needs me, the violin doesn’t. ..... I have also sworn to walk in the steps of the sainted Francisco Tárrega, who lived and died for his beloved instrument, with little hope of glory or gain.”


His first professional concert in Madrid featured Tárrega works, and some guitar transcriptions of J.S. Bach arranged by Segovia himself. Guitar studies continued, in the face of an unsupportive family who wanted him to study law, and disdain from some of Tárrega's pupils : "…..A few nights ago a young Andalusian guitarist gave a concert at the Ateneo. No one knows his real name - he must have called himself 'Segovia’ to get people’s attention. He played a tasteless program; side by side with the master’s transcriptions - in which he took unforgivable liberties - he dared play some of his own. ..…. He is so far from understanding the blessed school of our beloved Tárrega! At first glance one can see that the position of his hands is very careless; if he does achieve speed and clarity in difficult passages it is due to a sort of fallible intuition, not because he applies the proper rules. Worst of all.....he plucks the strings with his fingernails." 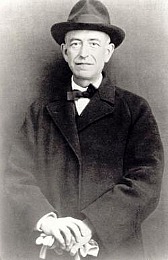 Concerts followed in Madrid, at the Paris Conservatory in 1915, and in Barcelona in 1916. Segovia married his first wife Adelaida Portillo in 1918. A year later we find the budding Maestro touring South America. The Rio de la Plata region along with Barcelona, was one of the few regions of significant classical guitar culture at the beginning of the 20th century. One of Tárrega's pupils Miguel Llobet had been making strides in the dissemination of the classical guitar idiom to new audiences and players. With the strength of his personality and artistry Segovia built on this work - he was aided by technological advances of the era such as audio recording, radio and air travel. Segovia set out his "Life-mission" as four tasks : "… the first to redeem the guitar from the folklore; second, to go to every part of the civilized world to show that the guitar is worthwhile to be on the concert stage; the third to create a very good repertoire for it; and the fourth, to influence the authorities of conservatories and musical academies and universities to teach guitar properly."

Composers were sought out to assist in the accomplishment of task number three, significantly he chose composers who did not play the instrument. The first to answer this call was fellow Spaniard Federico Moreno-Torroba, who composed Danza in 1921, and in the same year Segovia met the Polish composer Alexandre Tansman who went on to write a number of guitar works, including Cavatina. 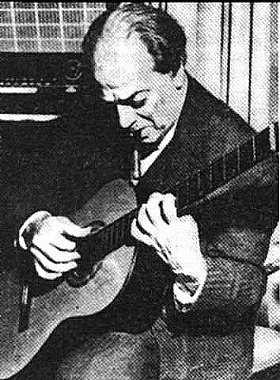 In 1922 he joined forces with the composer Manuel de Falla, who through the competition Concurso de Cante Jondo, wished to "classicize" flamenco and retain it in it's pure form. Segovia opened the competition, which significantly was held at the Alhambra palace, with a performance of Falla's Homenaje a Debussy para la guitarra. In Mexico performing for the first time in 1923, the Maestro impressed the El Universal critic Manuel Ponce. After an introduction to Segovia, Ponce subsequently built a fruitful partnership with the guitarist - Ponce composing, and Segovia editing. The Viennese violinist and amateur guitar player Fritz Kreisler persuaded F. C. Coppicus from the Metropolitan Musical Bureau to present the Segovia in New York. An American tour followed in 1928 which attracted the attention of the Brazilian Heitor Villa-Lobos. He dedicated his Twelve Études (Douze études) to Segovia, and also continued to write many guitar works for Segovia's use .