A talent at odds with
parental aspirations

Fernando Sor was born in Barcelona, Spain into a family of career soldiers. He initially planned to continue this legacy, but while young he was introduced to Italian opera, and the guitar by his father. The guitar at this time was not a highly regarded instrument, confined to taverns and the like. At age 11, to convince his parents the benefits of his musical interests, he wrote songs set to Latin lyrics - Latin studies for the young Fernando being important to his parents. 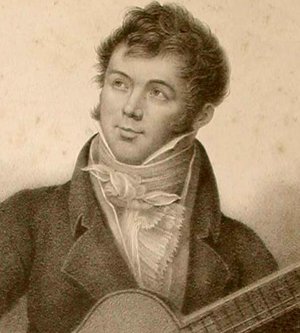 The leader of the Barcelona cathedral took note of his talent, but due to the death of his father Sor was unable to afford to study there. The new Abbot of Monterrat, Joseph Arredondo, also knew of the youngster and provided support in attending the "Escolania" - the choir school at the famous monastery. Sor reveals in letters from his later life that the institution was of great benefit to him, and had fond memories of it. Fernando Sor's musical achievements were regarded as a distraction from a career in administration, and thus, following the advice of friends, his mother placed him in a military school instead of the monastery. Here however, he continued to thrive musically, composing in his free time.


At age 18 Sor's opera Telemaco was staged at the "Teatro de la S Cruz, Barcelona. Until 1808 he held administrative sinecures in Barcelona, and the vicinity of Malaga, occasionally visiting Madrid. Many compositions were completed, including symphonies, string quartets, a motet and many boleros and sequidillas boleros for voice with guitar or piano accompaniment, during this period. Fernando Sor's works for solo guitar were probably also composed.
In 1808 France, Led by Napoleon Bonaparte invaded Spain. Sor protested playing in "Traveling military bands", and writing patriotic songs. Additionally he made have seen combat after being promoted to Captain in Cordoba. He later accepted an administrative position in the occupying government after the Spanish were defeated. Like fellow countrymen who embraced French revolutionary ideas, he was labeled an "afrancesados" and left Spain for Paris in 1812, after the Spanish repelled the French. He was never to see his homeland again. In France he quickly became renowned as a performer on the guitar, and as a composer for this instrument. As a composer, specifically of operas, he was however not successful and chose to try his talents elsewhere.

Fortune in England
and Russia

In London, England (1815) Sor published 11 sets of 3 Italian ariettas for voice and piano of which the Repository of Arts wrote in 1820 "Mr Sor's vocal compositions have gained such favor that a new set of ariettas from his pen, causes almost as much sensation as the publication of a new publication by the author of Waverley" (Sir Walter Scott). Fernando Sor's repertoire also published two English songs, as well as pieces for piano, piano duet and solo guitar. Since ballet was more popular than opera in London, Sor tried his hand in this genre; four being produced between 1821 and 1823.


Of these 'Cedrillon' was the most successful, having been danced at the Paris opera over 100 times (ironically keeping in mind his earlier rejections in France) and chosen for the grand opening of the Bolshoy theatre in Moscow, in 1823. Fernando Sor accompanied the ballerina Felicite Hallen to Moscow, where she danced the title role.

Sor returned to Paris in the 1820's where he continued to teach and perform on the guitar. Here he was friendly with Dionisio Aguado, and wrote a duet in which he commemorated the friendship marking one part Sor and the other Aguado. It was during this last period of his life that he composed the majority of his works for guitar. These works form an important part of today's guitar repertory. 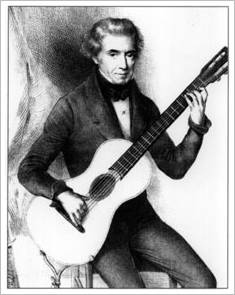 Fernando Sor's repertory includes an instructional called Methode pour la Guitare which was translated into English by A Merrick in 1832 under the title Method for the Spanish Guitar. Sor wrote his Op.63 Souvenir de Russie as a reminiscence of his Russian adventure, which he dedicated to Napoléon Coste. Coste was originally a student of Sor's in Paris and later the two performed together.

A melody derived from W.A. Mozart's opera The Magic Flute, is the basis of one of Sor's most popular works Introduction and Variations of a Theme by Mozart.

Variations on a Theme of Mozart
performed by Andrea Dieci