Born on february 9 1770, Fernando Carulli was a native of Naples. His father Michele was a prominent Literator, secretary to the delegate of the Neoplitan Jurisdiction. As a boy he was taught music theory and cello by a priest, as was common at the time. His first instrument was the cello, later choosing to dedicate himself to the study and advancement of the guitar in his late teens. Carulli was self-taught owing to the lack of guitar tuition locally in Naples. 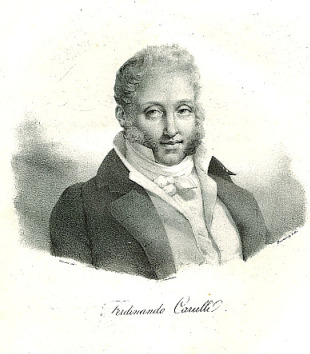 This gifted performer was so popular in Naples that he began touring Europe. Around 1801 he married a french women Marie-Josephine Boyer, and fathered a son with her. For a while he lived in Milan where his compositions were to be found in local publications. The earliest indication of his presence outside of Italy, is the publication by Gombart of Augsburg (Bavaria/Germany). Other works were published in Paris and Vienna in 1806-7. After a highly successful tour to Paris he moved to the city in 1809, then known as the 'music-capital' of the world, and remained there for the rest of his life.

In Paris Fernando Carulli was successful as a teacher and performer. He strove to introduce the guitar to the upper-classes of the French Capital. He published most of his works here along with those of fellow guitarists, being a publisher himself. In the 1830's many European guitarists, attracted by Carulli's verve and motivations to broaden the horizons of the guitar, followed him to Paris. 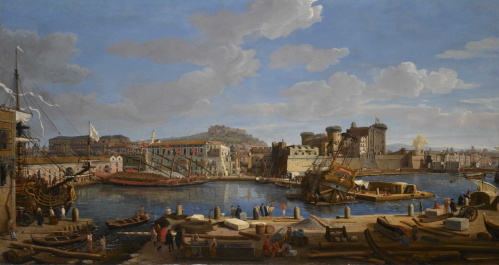 Through timbre, harmony, and sublime technique Carulli raised the standards, additionally advancing performing practice on the instrument. The Method book "Methode Complette" op.27 was a runaway success, being reprinted repeatedly in France and abroad; this was a standard instruction book at the time used by entire generations of guitar students. Until 1823 there was little competition for the master, other than Matteo Carcassi and Francesco Molino, it was in that year that Fernando Sor made his first appearance in Paris.

Pioneer of the
six-string guitar

Many of Carulli's masterpieces were initially rejected as being to difficult for amateur guitarists, thereafter he published some pieces himself. However the majority of the surviving works were pieces deemed to be appropriate for the teaching of various techniques for beginners. Included amongst Carulli's students was Victor Magnien.

Together with luthier Rene Lacote, Carulli experimented with guitar design, and contributed the advancement of the this, along with the construction of the instrument. He was a pioneer of the six-string guitar, and it's use in solo settings. 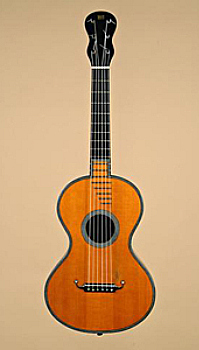 A guitar made
by Rene Lacote

His guitar music incorporated elements learnt from contemporary piano and violin material, including left-hand legato, glissando and harmonics. He wrote chamber music for duos, trios and quartets, arias and songs for guitar and voice.