A student of the master, Tárrega

This Spanish maestro was born in the village of Granadella, near the city of Lleida. An important figure in guitar history, he is regarded as the leading spokesman for twentieth century guitar pedagogy. He was a student of Francisco Tarrega. 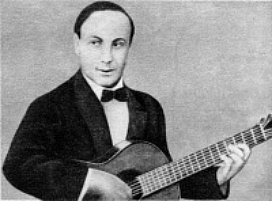 His musical studies began with the director of the village band who taught him the sight-singing method, solfeggio. These lessons continued and he also enrolled at the Municipal school of Music in Barcelona. At age 11 years he learnt to play the bandurria (similar to mandolin and cittern) and was selected to perform with the famous Catalonian bandurria and guitar orchestra “Estudiantina Universitaria” at the Paris Exhibition in 1900. At the behest of his father, Dr. Don Ramon Pujol, Emilio initiated engineering studies which were detained by a long bout of pleurisy (a lung ailment) after which he was able to convince his father of his passion for music as a career. In 1901 he began his studies with Francisco Tárrega at the Conservatory of Barcelona. At this time Tárrega's former student Miguel Llobet was expanding his performances beyond Barcelona thus beginning his illustrious concert career. Referring to Tárrega as his "mestre" (Catalan for “Maestro”), in his biography he endearingly described the then 49-year-old teacher as graying, with a long beard in the style of the Spanish painter, Zorilla. 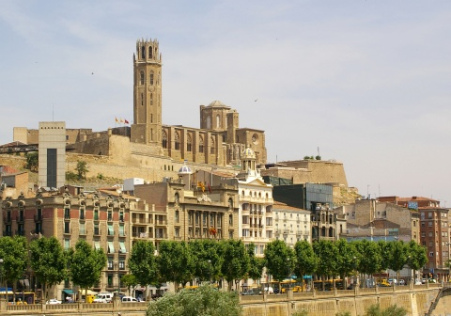 The city of Lleida, Catalonia near to Pujol's
birthplace and where he later launched
his International Courses of Guitar, Lute and Vihuela

His first few lessons alone with the “mestre” dealt only with position, tuning, left and right hand positioning, and harmony. Pujol was later chosen as one of Tárrega's elite students and was included in a daily program of instruction : Often the students were invited to a concert of guitar duets played by their teacher and the prolific arranger Dr. Severino Garcia-Fortea. Emilio Pujol continued with these studies until 1907 after Tárrega became partially paralysed. Francisco Tárrega died two years later at which time Pujol was in Madrid studying theory and composition with Agustín Campo, a former student of Dionisio Aguado. Pujol keenly felt the loss of his former “mestre” (Catalan for “Maestro”) as was expressed in his biography Tárrega, Ensayo biografico. Both in mourning, Llobet wrote to Pujol expressing his loss as well as inviting to him to stay in touch - “Write me or better yet come. . . [to Paris]. . . for it is your opinions that interest me.” . 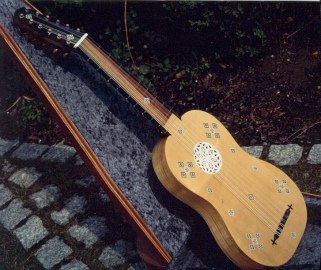 Emilio Pujol gave his first recital at the age of 21 years in Lleida, and later several months before Tárrega's death in May, 1909 he made his Barcelona debut. By 1912 his career as concert guitarist was established by his appearance at Bechstein Hall (today known as the Wigmore) in London. He also performed in a private appearance before the Spanish Royal family and Queen Victoria. Following World War I, at the behest of Miguel Llobet, he undertook his first tour of South America beginning in Buenos Aires. In 1923 he married an Andalusian singer and guitarist, Matilda Cuervas, in Paris. Pujol's concert tours at this time were interrupted periodically by time in Paris where he conducted historical research into instrumental predecessors of the guitar.

Musicological studies were initially conducted under the tutelage of Felipe Pedrell (1841-1922), the Spanish composer and historian who championed the development of nationalistic Spanish music and influenced many Spanish composers such as Enrique Granados and Isaac Albeniz. Later in 1926 he continued his studies under Lionel de la Laurencie (1861-1933), (author of the lute book Les Luthistes) at the Conservatory of Paris. These latter studies resulted in an encyclopedic history of the guitar entitled La Guitare. Emilio Pujol's research included the Golden age of the Vihuelists (the vihuela was a guitar-like instrument used in Spain mid-2nd millennium) and his concerts at this time included music from this period (1926-27). In January, 1936, Pujol discovered at the Jacquemart-André Museum in Paris, the only original example of a vihuela from the sixteenth century which is known today. The Spanish luthier Miguel Simplicio produced a copy of this instrument which Pujol subsequently used in performances.

Between 1941 and 1946 Pujol prepared and edited a volume covering the vihuela composer Luis de Narváez which was published as part of a series Monumentos de la Musica Española. The series eventually included volumes covering Alonso Mudarra and Enriquez de Valderrábano published in 1949 and 1963 respectively. Prior to his death, Pujol had begun work on the largest of vihuela music books, the Orphenica Lyra by Miguel Fuenllana, originally published in 1554. Pujol regarded this book as the pinnacle of the vihuela school. 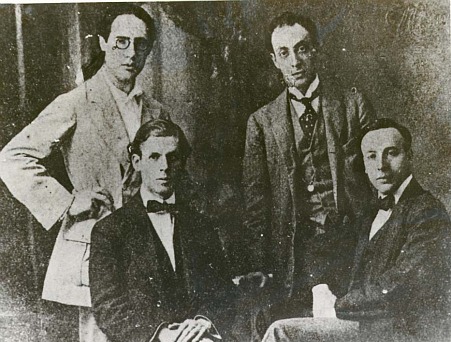 The guitar's acceptance as a serious instrument

In one of the earliest instances of guitar instruction being included in an academic institution, Emilio Pujol held guitar classes at the Lisbon Conservatory of Music from 1946 to 1969. He was personally invited to give classes at the Accademia Musicale Chigiana by Andres Segovia, and also adjucated guitar competitions. In 1956 his first wife Matilde died and seven years later he married Maria Adelaide Robert, a noted Portuguese pianist and singer who greatly assisted him in his final years. He returned to the region of his birth, Catalonia in 1965 to launch his International Courses of Guitar, Lute and Vihuela in the city of Lleida, Spain. The event was held every summer and was attended by students and teachers from around the world. In 1972 it was moved to the thirteenth-century village of Cervera.