Near Salzburg, the town of Mattsee in the Central-European country of Austria was the birthplace of Anton Diabelli on th 5 September 1781. Diabelli was best known in his time as a publisher, and today is familiar as the composer of the waltz on which Ludwig van Beethoven wrote his set of thirty-three Diabelli Variations. 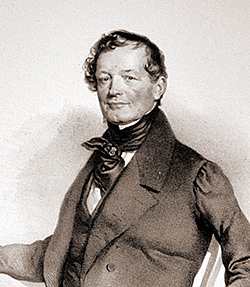 Diabelli sang as a choir boy in the Salzburg Cathedral, and was taught there by Joseph Haydn's younger brother Michael. He composed works early on, including six masses by the age of 20. In 1800 he joined the monastery at Raitenhaslach, Bavaria and left for Vienna 3 years later when Bavaria closed all it's monasteries. In the Austrian capital he continued to compose, made arrangements and taught piano and guitar. A comic opera Adam in der Klemme was written in 1809. After learning the trade of music publishing through employment as a proofreader in an existing establishment, in 1817 he partnered with a dealer named Pietro Cappi to create the firm of Cappi & Diabelli. 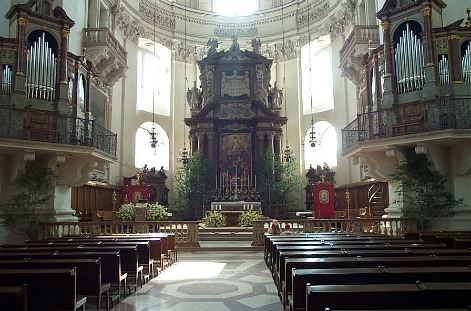 The magnificent Salzburg Cathedral
where Diabelli sang in the choir

Cappi and Diabelli's catalogue featured an astute range of music targeting in the main the amateur musician market, including opera tune arrangements, dance music, collections for guitar or piano, and their most popular series, 429 volumes of the Latest Popular Comic Theater Songs. For guitar interest one of his notable contributions were transcriptions for piano and guitar of all three of Mauro Giuliani's Concertos for guitar an orchestra.

A Transfer into the
world of Publishing

As a commercial venture, Diabelli wished to publish a volume of variations on a waltz, with each variation written by a different composer of accomplished repute, most of them Austrian but not exclusively so. Fifty-one invited composers responded with pieces, including Beethoven, Schubert, Carl Czerny, Johann Nepomuk Hummel, Ignaz Moscheles, and the eight-year-old Franz Liszt (although it seems Liszt was not invited personally, but his teacher Czerny arranged for him to be involved). Czerny was also enlisted to write a coda. The anthology was known as the Vaterländischer Künstlerverein and was published in two parts, the first entirely composed of the 33 variations from Beethoven! This set of variations, now known as the Diabelli Variations Op. 120, is generally regarded as one of the greatest Beethoven piano pieces and as the greatest set of variations of their time. Franz Schubert was first published by Cappi & Diabelli in 1821, with the song "Erlkönig" (The Erl-King), thus initiating a series of publications of that genius's work. Schubert was a capable guitar player, and wrote extensively for the instrument in ensembles.


After 8 years in partnership Cappi and Diabelli parted company in 1824, afterwhich the firm, now consisting of a partnership between Diabelli and Carl Anton Spina (1790 - 1857) with the two performing artistic and business duties respectively, was renamed Anton Diabelli & Cie. Spina continued to run the firm after Diabelli's retirement in 1851, prominently featuring the music of Johann Strauss II and his brother Joseph. Diabelli died in Vienna at the age of 76.