A student of Fernando Sor

This guitar Maestro was a Frenchman formely believed to have been born in 1806, but now known, since the discovery of relevant birth registers, to have entered the world on June 27th 1805. His mother was his first teacher, she was an accomplished guitarist. Jean-François Coste, the mayor of the village of Amondans, was Napoléon's father. A military man it seems he gave the name of his esteemed Emperor, Napoléon Bonaparte to his son. Napoléon Coste's career began when he was a teenager, with him teaching and performing in many concerts. 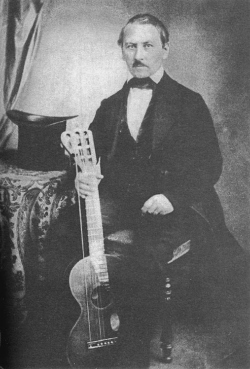 He moved to the capital, Paris where he studied under Fernando Sor at the age of 24 and quickly established himself as the leading French virtuoso guitarist. Sor and Coste played at least one concert together, and the former dedicated his last composition, the duet for two guitars Op. 63 Souvenir de Russie to Coste. The publication Revue et Gazette Musicale de Paris compared Coste very favourably with Sor in his performance and composition in 1838.

He was friendly with fellow guitar illuminaries Dionisio Aguado, Matteo Carcassi and Fernando Carulli, all of whom resided in the French capital at the time. 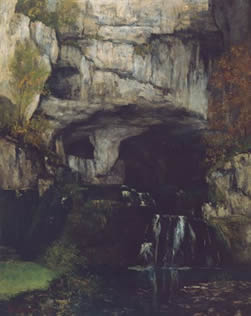 The Source of the Lison
painted by Gustave Courbet
Napoléon Coste used this
Wonder of Nature as
inspiration for his
La Source du Lyson Op. 47

In this era patronage by an aristocratic peer was usually necessary for commercial survival, as a artist. Coste had difficulties in finding such patrons, partially as a consequence of the general decline in popularity of the guitar in this period. Napoléon Coste's performing brilliance provided financial stability but he failed to find a publisher for his compositions, and found it necessary to fund the publications himself.

Nearby his home village in the Doubs, is a spectacular cavern where the river Lison exits, this scene was the inspiration for Coste's Op.47 La Source du Lyson. The work is composed of three sections, an introductory Allegro, an Andante sostenuto, and a Rondo. Theodor Rischel, in an article on Coste wrote that the first section imitates the murmuring of the river (Allegro), the second a country idyll (Andante sostenuto), and the third is a peasant dance and festival (Rondo). He goes on to suggest that the work is an attempt to stylistically replicate the programme music of Hector Berlioz, or the Pastoral symphony by Ludwig van Beethoven. Coste admired Berlioz's work and dedicated the op.15 Le Tournoi to his fellow Frenchman.

An accident in 1863 left Coste with a broken arm and incapacitated right hand, and hence quit performing. However he hired an assistant and continued to teach guitar and composition.

Napoléon Coste's output included 50 compositions. Included in these were songs and chamber music, particularly featuring the oboe, as well as works for the 7-string guitar. He was one of the first to transcribe seventeenth century music to the modern notation, and was chiefly responsible for reviving interest in baroque guitar music. Fernando Sor had written a method for guitar, which Coste edited and republished after that maestro's death in 1839. Napoléon Coste died in Paris at the age of 77, leaving a significant catalogue of original compositions.