The Bermuda Guitar Festival, a project and dream of local guitar teacher Stephen Crawford, saw its inaugural event in 2003 and eleven years later it continues to be popular. The festival hosts fellow faculty members from the Bermuda School of Music (BSM) and international artists in a series of concerts and workshops. Guitar students will also appear on stage.

The festival runs from the 29th May to Sunday, with Public concerts on Friday, Saturday and Sunday.

The first concert starts at 7.30pm on Friday, it will feature solo performances from Mr Crawford and the award-winning American virtuoso classical guitarist Matt Palmer. Mr Crawford’s programme will include guitar favorites by South American, Spanish and French composers, and concludes on a jazzy note with the evergreen "Take Five".


Mr Palmer will open his repertoire with the Frenchman Roland Dyens’ Saudade No 3. Works by the Spanish composer Vicente Asencio will follow, as well as music from Brazil's Sergio Assad.
Of particular interest will be a piece especially written for Palmer by Professor Olga Amelkina-Vera, titled "The Heavens Hundred" the piece honors the Ukranian protesters killed in Kiev earlier this year by government snipers. 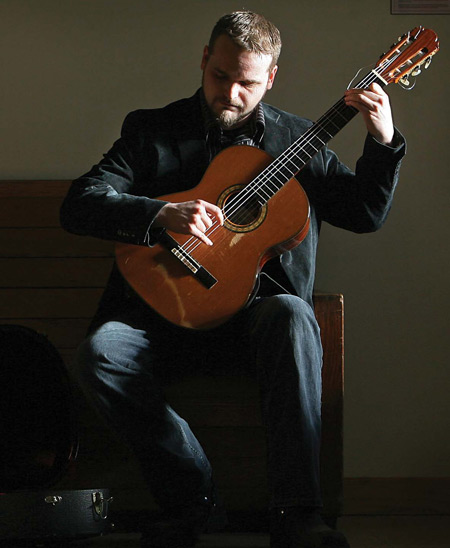 Matt Palmer will be performing
at the Bermuda Guitar Festival


On Saturday (May 31) both BSM classical guitar teacher Jerremiah Smith, and US jazz guitarist Jody Fisher will appear in solo performances. Smith's programme will include Tarrega's "Gran Vals" as well as the Czech guitarist Jiri Jirmal's "Baden Jazz Suite", which was written in homage to the Brazilian guitarist Baden Powell.

Making his third appearance at the Bermuda Guitar Festival, Jody Fisher will perform a mixture of jazz standards and his own compositions. In addition to this performance Mr Fisher will also give three workshops for advanced guitar students. The workshops - which are already fully subscribed - will instruct the students in topics such as technique and fingerboard harmony, and improvisation skills. 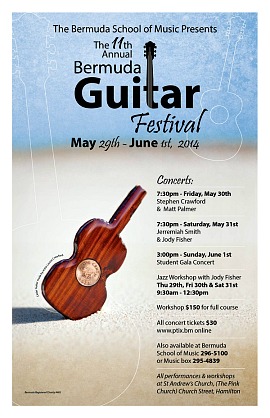 The Festival concludes on Sunday (June 1) with a admission-free gala BSM guitar students’ concert at 3pm. Donations will be welcomed.

St Andrew’s Presbyterian church on Church Street (the pink church opposite the drive-in Bank of Bermuda), will play host to all the concerts and workshops. Performances on Friday and Saturday (May 30 and 31) begin at 7.30pm.

Tickets can be bought for $30 from The Music Box, the Bermuda School of Music (296-5100), and additionally on-line from Premier Tickets Bermuda (www.premierticketsglobal.com).