Scottish classical guitarist Paul Galbraith has an uncommon technique and plays an equally uncommon guitar, the eight-string version if the instrument. His technique involves holding the guitar in an upright position, while the instrument is held by an endpin similar to a cello, finally the endpin rests on wooden resonance box. Mr. Galbraith will be appearing at New York's SubCulture entertainment venue on Monday, 5th May. Included in the concert are his own transcriptions of works by Bach and Mozart, including Allemandes from both composers.


Galbraith said of the classical composer, "The fascinating thing with Mozart's Bachian homage, is that he manages to have it both ways—to sound, that is to say, like Bach, but also unmistakably like his unique self." 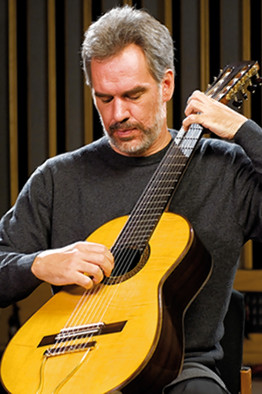 The audience will also be treated to a piano sonata by Mozart, as well as transcriptions of Bach's first two cello suites.

At age 17, Galbraith entered the prestigious Segovia International Guitar Competition, where he won the Silver Medal. The great meastro was present for Galbraith's performance, and called his playing "magnificent". Mr. Galbraith's double cd titled Complete Solo Bach Violin Sonatas and Partitas (DE 3232), was nominated for a Grammy Award in 1998, in the category of Best Solo Instrumental Album. Gramophone Magazine likewise heaped praise on the album, choosing it as one of the two best CDs of 1998. The magazine remarked, "a landmark in the history of guitar recordings." The album also reached the top 10 on the classical charts in Billboard Magazine.