Rodrigo y Gabriela's latest fiery guitar offering is an album named "9 Dead Alive", the duo's first record in five years. It was recorded and produced at their home studio in Ixtapa, Mexico. The historically themed album covers 875 years of history on the 9-song set, and each track is inspired by a different character in history.

The first - the "Soundmaker" - being a homage to the creator of the modern guitar, the Spaniard Antonio de Torres Jurado:

"[The song] is a tribute to Antonio de Torres Jurado," Rodrigo tells Rolling Stone. "He was a luthier from the 19th century, and his contribution to the world was to give the classical guitar the shape we know it now. If it wasn't for him this album wouldn't even exist." 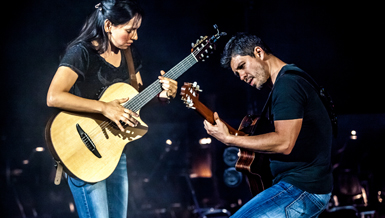 Clocking at nearly five minutes, the song finds the athletic guitarists at their most dramatic, with percussive rhythms and a rocky lead guitar.

The last album, "11:11", which they recorded in 2009, was followed by collaborations, on Hollywood blockbusters "Pirates of the Caribbean: On Stranger Shores" and the animated "Puss N' Boots".

9 Dead Alive is out now on ATO Records. Rodrigo y Gabriela will  follow the album's release with concert tours in the U.S. and Europe, starting May 1st in New York.